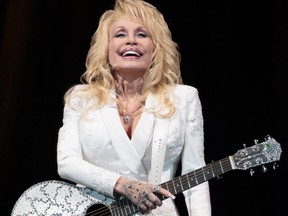 When establishing a new career path, we all have to tackle tasks we would prefer to avoid. Dolly Parton is no exception.

Parton reportedly struggled to connect with the crowd, whom Rolling Stone reporter Chet Flippo described as decked in “white shoes and burgundy sports coats and gowns” and looking more like they were heading to “the clubhouse of a race track” than a concert.

“Latecomers linger outside to chat while Dolly gamely tries to get some feeling out of the crowd. She is partially successful,” he wrote.

Out of frustration, Dolly suggested pumping weed smoke into the venue to loosen up the audience.

“It’s too bad we can’t pipe marijuana smoke into the place,” she quipped. “Maybe they’d giggle durin’ ‘Me and Little Andy.’”

In addition to becoming one of the biggest country stars