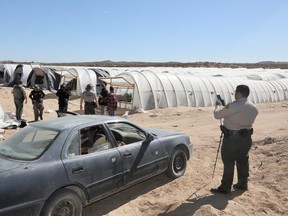 Authorities in Los Angeles County have announced the bulldozing of 75 greenhouses in what they are calling the largest bust in the county’s history of illicit cannabis grows.

The department carried out a series of raids in Northern L.A.’s Antelope Valley early on Tuesday morning that reportedly involved more than 25 search warrants for multiple locations. The California Department of Fish and Wildlife, the Drug Enforcement Agency (DEA), the United States Army, and several sheriff’s departments from neighbouring counties contributed to the bust, which involved over 400 personnel.

“We’re going to send a loud and clear message to all the cartels in the illegal operations: your days are over, here; and you need to pack up and leave, or we’re going to find you,” Sheriff Alex Villanueva, who also tweeted about the incident, said in a statement.

Villanueva says that the number