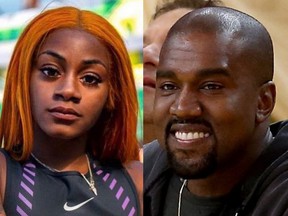 “The notion that weed is a problematic ‘drug’ is rooted in racism,” actor, producer and weed entrepreneur Seth Rogen tweeted earlier in July.  “It’s insane that Team USA would disqualify one of this country’s most talented athletes over thinking that’s rooted in hatred. It’s something they should be ashamed of.”

But Travis Tygart, CEO of the U.S. Anti-Doping Agency, noted following her suspension: “The rules are clear, but this is heartbreaking on many levels; hopefully, her acceptance of responsibility and apology will be an important example to us all that we can successfully overcome our regrettable decisions, despite the costly consequences of this one to her.”

Richardson accepted the sanction but has not been cooling her heels since. She has reportedly confirmed that after the suspension ends, she will be racing during the Prefontaine Classic in late August.

And she doesn’t appear