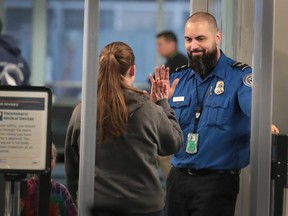 Consequently, weed-loving wanderers will be able to pass through checkpoints at places such as Albany International Airport sans hassle, the Times-Union quotes Bart R. Johnson, a former state police colonel and current security director for more than a dozen airports upstate, as saying.

Instead, airport authorities will focus more on seeking out weapons and searching for safety threats to other passengers.

“We don’t seize [weed]. We just look for threats — explosives, knives, guns; we don’t look for illegally possessed narcotics,” Johnson reported. If cannabis is discovered during a pat-down, for example, the first consider is to determine if it is a threat and, if illegal, report the event to law enforcement.

Albany County Sheriff Craig Apple reportedly echoed Johnson’s comments, saying that while his force previously made numerous stops and arrests for cannabis, they are no longer doing so, per the Olean Times