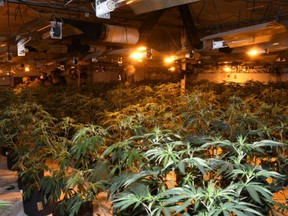 A 50,000 square foot industrial unit was home to “the largest scale cannabis grow the county has ever seen,” according to a report from Lincolnshire Live.

According to a news release from Lincolnshire Police, the men were each sentenced to 39 months after pleading guilty to the production of cannabis at Lincoln Crown Court.

“The sheer scale of this grow […] required the tireless efforts of a large number of staff to dismantle and investigate the industrial operation. It was, by far, the largest cannabis grow the County had seen,” the release states.

The men, Alfred Alla, 21, Xhemal Derdi, 24, and Ismail Elezi, 26, are Albanian nationals and face deportation following the completion of their sentence.

A study published last year from the University of Cambridge found that migrants arrested for working on cannabis grows in the U.K. are often