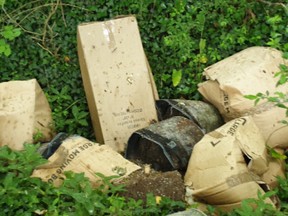 Police in the U.K. are trying to track down the owner of some illegal cannabis after a passerby in Blandford found multiple bags of the green stuff in a bush.

The drugs have since been disposed of and a full investigation launched, the statement notes. No arrests have yet been made.

It’s not clear if whoever put the cannabis inside the hedgerow was hiding or ditching it. Whatever the case, the U.K. has witnessed its share of failed bids.

Although not affording anywhere near the same level of cover, officers with the Malvern Police’s Safer Neighbourhood Team seized a big batch of mystery weed from a ditch after a passerby reported seeing suspicious plants this past March.

Also in March, a U.K. court heard that an accused drug courier being followed by police in 2021 apparently panicked and ditched