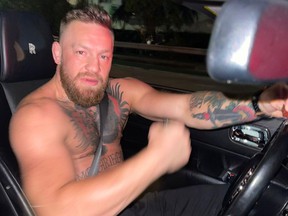 It’s not entirely clear what Conor McGregor was smoking, but the mixed martial arts star has drawn criticism after posing for photos with what appears to be a blunt while operating a vehicle.

In August, McGregor posted stories of himself smoking a “big blunt” and claiming that his Oregon-based hemp farm is “the best in the USA.”

“A few hits of this one to unwind and enjoy the sounds and the surrounds. Works a real treat with my recovery, too. Everything in moderation though,” McGregor said in one post, blunt in hand .