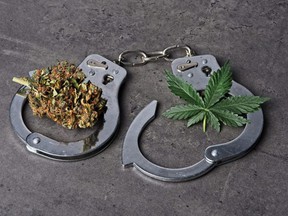 A police investigation of an incident in which a juvenile was selling cannabis on school grounds has allegedly revealed the adult who was supplying the drugs.

The juvenile in question was arrested in late March.

In another police Facebook post dated Mar. 29, a school resource officer at Greenfield High School began investigating reports of a 17-year-old student selling drugs to other students on campus.

The following day, officers with the Greenfield and Soledad police departments served a search warrant at the student’s home and, simultaneously, contacted the student at school.

That was when the pupil was found with cannabis vape pens, pre-rolled joints and more than $364 in cash. In the home, “officers recovered packaged marijuana vape pens, a scale, a smoking pipe, a cell phone labeled ‘trap phone’ and over ($1,950) in cash,” the statement notes.