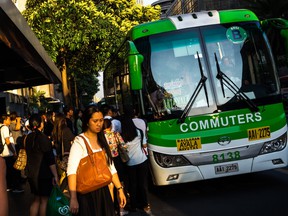 Three people are under arrest after police in the Philippines discovered 44 kilograms of cannabis in a bus terminal in Pampanga province, reports the Inquirer.

The three individuals were arrested at the bus terminal and face charges for violation of the Comprehensive Dangerous Drugs Act of 2002.

The bus arrived from Tabuk City in Kalinga province and police are still investigating who might have sent the shipment.

Last month, police in South Carolina discovered nine kilograms of cannabis in the luggage of a commercial passenger bus.

Police were conducting a property check at the Pilot gas station in Florence, S.C. when the bus pulled in and officers noticed the smell of pot