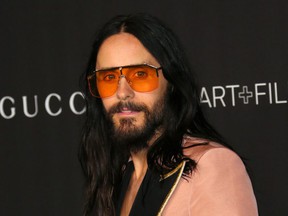 Jared Leto apparently had an entrepreneurial bent when he was young. Unfortunately, the not-yet-award-winning actor bent towards cannabis and that got him fired from his gig at a movie theatre.

“I was an entrepreneur,” he quipped during the video (at about 2:56 in the clip).

Born in Louisiana, Leto and his family moved about after his parents split. They lived in, among other places, Philadelphia and New York.

We apologize, but this video has failed to load.

Recreational cannabis was illegal when he was young in all three states, and remains so today in Louisiana. While possessing 14 grams or less in the state is a misdemeanour with no possibility of jail time and a maximum fine of US$100 ($127), having between 14 grams and 2.5 pounds (1.1 kilograms) can lead to up to

Study finds more frequent cannabis use among the young, racial minorities and those with low socioeconomic status