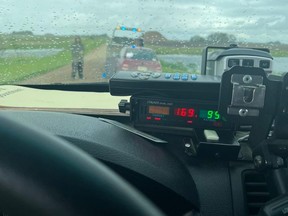 A driver in Saskatchewan who tested positive for THC has received a $1,011 fine and a 60-day licence suspension after a traffic cop clocked his speed at 169 kilometres per hour (km/h).

That speed far exceeded the 100 km/h zone he was driving in along Highway 6 when he was spotted, according to a tweet from Combined Traffic Services Saskatchewan (CTSS). The fine is set by the Provincial Fine Schedule, with the level generated and printed automatically after an officer types the recorded speed into his or her computer.

Beyond the excessive speed, though, CTSS reports that the driver also tested positive for cannabis after being stopped.

“Driving under the influence of cannabis is considered impaired driving and comes with the same consequences as driving while impaired by alcohol” notes information from the provincial government. “In Saskatchewan, it’s illegal to drive while impaired