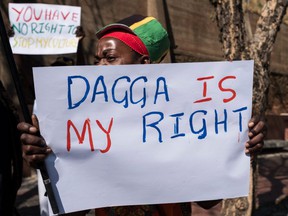 Several cannabis plants have been destroyed and a leader from South Africa’s Indigenous Khoisan community has been arrested after police cracked down on a grow near the president’s office, BBC reports.

The group reportedly set up camp to campaign for the official recognition of their language and for the Khoisan people to be recognized as the first Indigenous nation of South Africa.

Four people were arrested, per News24, for “dealing in dagga [cannabis], the illegal cultivation of dagga on public property and failing to wear a mask after being instructed to do so by a law enforcement officer,” according to a police statement.

King Khoisan’s wife, Queen Cynthia, said the cannabis was being used for medical purposes, including cancer and high blood pressure. Per BBC , she told reporters that she was “very, very cross” and the president was refusing to speak with