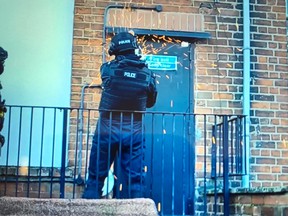 Two men in their 20s are in custody following a foot chase by police in the U.K.

Trying to flee cannabis grows on foot is rarely a successful strategy.

Last year, U.K. officers began a raid at an illicit cannabis operation when a single man bolted from the home. The man later got caught on a fence and opted to shed his clothes as he fled the scene.

With officers pursuing the naked man, local residents took to Facebook to ask what was going on.

“Anyone know why a naked man ran through Cumberland Road park and down Oxford Street with about seven police officers?” one person posted, before others chimed in with similar questions.

The 27-year-old man was later apprehended in a back garden and charged with cannabis cultivation.