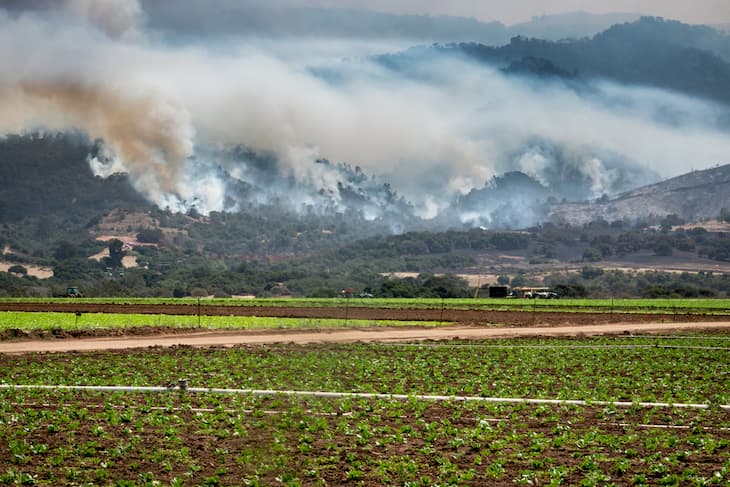 A record wildfire season in California has raised serious concerns for cannabis growers. The Croptober- the primary season of harvesting marijuana in the state, could be ruined as growers are stuck between a calamity and lack of insurance.

Between a rock and a hard place

Crops are difficult to ensure because it is federally illegal to grow Cannabis. Now California cannabis growers are demanding protection for their billion-dollar produce. In 2020, California has faced 9,177 wildfire incidents, burning over 4.1 million acres to dust. According to Cal Fire, this number breaks the 2018 record.

Growing, possessing, and using cannabis for adults older than 21 years of age, was legalized in 2016 with Proposition 64, which received 57.13% votes. Federal laws still consider it illegal. However, cannabis growers continue to pay the price of fire damage to their property. Sweet Creek Farm, based in Sonoma County, is a licensed cannabis grower that faced severe damages due to the fires.

Run by the mother-daughter duo of Kila and Keala Peterson, the farm suffered extensive damages during the Walbridge Fire in August. A whopping 70% of the crop was destroyed, valued at $150,000. None of this was insured.

It’s not just the fire, but also the smoke

While fire can directly destroy crops, smoke from the thousands of wildfires can also damage the quality of unharmed cannabis. Plants can absorb harmful chemicals and even lead from the atmosphere. Ash can be manually removed from the plant, but this method doesn’t work effectively when they start flowering. Cannabis goes through extensive testing at California Cannabis Testing Labs to pass seven screening and analyses. Produce that doesn’t pass these tests is tossed aside.

The damaged but salvageable crops can still be used for making oil and discounted bulk bass but cannot become a premium smokable product. Flowers are the most sought-after parts of the plants, which come from the female cannabis plant and can be smoked in a number of ways.

With growing challenges for growers, businesses that supply to growers will face equal damage. The famed Emerald Triangle, which produces the largest stack of cannabis than any other place in the US, has also been ravished by fires. Composed of three counties- Trinity, Mendocino, and Humboldt- the Emerald Triangle has seen some farms burning to ashes while others are affected by smoke.

Growers are now pushing for insurance, especially as their money is locked in licensing while their crops continue to face fire damage.

Experts explain how to land a high-paying cannabis career in the U.S.

High THC products and where to find them

Smoked weed in the past? That doesn’t mean a person can’t work at the White House