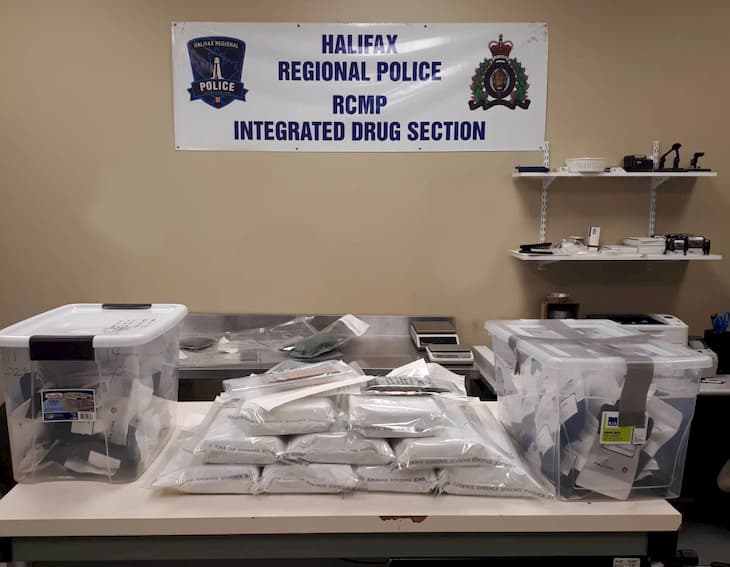 Halifax investigators, Canada, have seized cannabis edibles, among other illicit drugs. The search conducted by the Halifax Regional Police emergency response team alongside the Canada Border Services Agency arrested a 31-year-old man. Among other drugs seized was cocaine with a street value of nearly $1 million.

140 packages of cannabis edibles and 9 kilograms of cocaine

According to a press release by Halifax Regional Police, the search involved a vehicle on Highway 102 just close to the Enfield exit. The operation was part of an ongoing investigation. Halifax investigators seized 140 packages of cannabis edibles, 5 cases of illegal tobacco, 9 kilograms of cocaine, and more than $7000.

A similar raid in Germany

Only two days ago, police in Aachen, Germany raided three professionally run cannabis plantations and heaps of weapons in a large coordinated operation. The authorities took several days to remove some 1000 weapons out of the scene.

According to police and prosecutors in Aachen, illegal cannabis plantations were discovered in Rhineland region, following an investigation that took “extraordinary dimensions.”

Legal marijuana joints in Germany soon, as major parties agreed to nationwide legalization Cannabis not invited as Canada reopens its borders on August 9 Teenage cannabis grower locked up for tending over 200 plants in Bradford

Since mid-October, investigators uncovered up to three professionally run plantations, together with masses of weapons and ammunition. So far, 11 suspects have been arrested following the raid. The first two raids took place on October 19, leading to the discovery of one plantation in Euskirchen city and another in Herzogenrath, close to Aachen.

A police statement revealed that the plantation in Euskirchen had 2,300 mature cannabis plants and 2,000 cuttings. Police also found 1,000 weapons, ammunition, and parts of weapons at the site. According to the statement, it took police several days to secure transport of the weapons out of the site, even with the help of colleagues from other police departments.

The street value of €1.5 million

According to police, the two plantations had a combined value of cannabis estimated at €1.5 million ($1.8 million). Towards the end of October, investigators discovered a third plantation in Titz, near the Rhineland city of Duren. It had 1,600 mature cannabis plants.

The current ongoing investigations have left 25 properties and buildings examined, according to police. In one of the raids in Hungary, a 34-year-old man was found in possession of false immigration papers. He was suspected of having connections to the Euskirchen plantation. The suspect is still in detention awaiting extradition, police say.